Steve Epstein, a club member, will be attending the Dolphins-Bills game along with fellow alumni on Sunday, October 23; however, he won't be seated among us in the club seats. He will be situated in the press box operating the scoreboard to update the down, distance and yard line after each play. Steve, a longtime high school football official, had previously performed this task several years back at FAU home games. 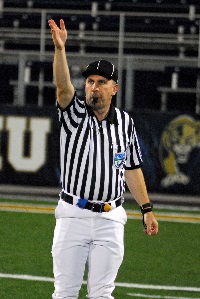 Having started officiating in New York shortly after graduating from Wharton, Steve is currently an on-field crew chief with the Broward Football Officials Association. His career has been highlighted by two state championship games in Florida as well as several high-profile contests that aired nationally on ESPN.

On Tuesday, October 25 Steve will serve as one of our hosts for the club's Networking/Social Hour at City Fish Market in Boca Raton. Click HERE to register!